The Next Rembrandt: why did you do that?!

Michael Crichton's book Jurassic Park  caused a true 'dinomania' when Steven Spielberg decided to make a movie out of it in the early nineties of the previous century. The brilliance of his book lies in the scary message it conveys: even if science shows that you can do it, there may still be good reasons not to do it. It may not be a good idea to create a weapon of mass destruction (too late for that). It may not be a good idea to clone a dinosaur (still quite impossible). The question every scientist should ask him or herself is the same they ask their children on a daily basis: 'Why did you do that?!" It is tempting to say that the humanities are very good at asking the 'why' question, as suggested by the picture below, but that seems to be just vanity, as if the natural scientists never consider if they should be doing what they are doing. 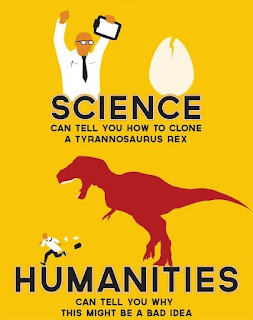 This year a digital humanities project was in the news that was highly impressive and intriguing, but also immediately raised the question with me: 'Why did you do that?!' A team of the University of Delft collaborated with Microsoft and museum the Mauritshuis to create the 'next Rembrandt', a painting of the seventeenth century Dutch artist Rembrandt van Rijn. Their work is generously sponsored by the Dutch ING bank. They have put a very nice video on their website in which they explain how they worked on creating the 'next Rembrandt'.

According to ING spokesperson Tjitske Benedictus, the ING wanted to bring their 'innovative spirit' to art and culture. Ron Augustus from Microsoft says they use 'technology and data' to create something like Rembrandt did with his paintbrushes. They had the computer analyse a large number of  (portrait) paintings from Rembrandt, to extract the typical Rembrandt 'nose',  'eyes', 'ear' and 'mouth', and calculate the distance between them on a face. They planted these features on a typical Rembrandt person, which not surprisingly is a 30-40 years old Caucasian male, leading to the 'next Rembrandt' (or 'average Rembrandt' maybe), printed by a 3D printer.

Even though I am very much impressed by the science behind all of this, the question remains 'why would you want to do that?' David de Witt from the Mauritshuis mentioned that Rembrandt was famous for being able to portray human emotions better than his contemporaries.  Emotions from real people, immortalised by the grand master is what makes a Rembrandt a Rembrandt. This 'next Rembrandt' however, is nothing more than an average of all those emotions,  planted on an average face of an average person that never existed, and as such not interesting. The creators may believe that Rembrandt would be pleased if he knew his work still lives on like this, but I find it more probable he would ask 'Why did you do that? My real paintings are still displayed all over the world.'
At the end of the video ING's T. Benedictus concludes:  'The Next Rembrandt makes you think about where innovation can take us, what’s next?' Despite my reservations about the product itself, I indeed am thinking of where this innovation could take us. The technology used to analyse Rembrandt's paintings could be invaluable for art historians. To name a few possibilities:

1) Use the data on the average Rembrandt to identify unknown paintings as belonging to Rembrandt (or not).

I would, for example, really like to know, would like to see quantified, how the faces Rembrandt painted were different from those painted by other Dutch seventeenth century masters, sixteenth century predecessors, or eighteenth century followers. Or to know what styles Rembrandt may have borrowed from sources that are not so apparent at first glance. To answer such questions a huge database of paintings from a huge number of artists would have to be analysed in the same way as the work of Rembrandt.

Fortunately the ING thinks it's important to bring innovation to culture, so it should be a matter of time before they sponsor such a project.
Gepost door Serge ter Braake op 07:48